* not during covid
** the creators, the platform is trash
*** on purpose don't tell them sshh

> Something that worked for me was imagining that where I wanted to be [a fiction writer etc.] was a mountain. A distant mountain. My goal.

> And I knew that as long as I kept walking towards the mountain I would be all right. And when I truly was not sure what to do, I could stop, and think about whether it was taking me towards or away from the mountain.

Hi new people! I'm being extra careful with follow requests at the moment due to a wave of

which has led to my toots being screenshoted, personal attacks, the whole jazz.

if you want to debate the evils of censorship, kindly go federate with somebody else. Actually if you’re an instance admin do try to debate, this way I know to add your domain to the blocklist.

if you're right-wing and want to organise together against big tech, go suck my nonexistent balls.

That's the ask. I’ll just speak bluntly for the rest of this toot; please avoid reading it if the bitter tone is not good for you.

CW is the big one. CW your food posts for food, for the sake of people with eating issues and the like. But also mark them as nonvegan, meat, milk or however you prefer to word it. CW text-only posts talking about those things.

including milk, please. especially milk, please. there’s a reason for the vegan saying ‘dairy is the cruelest of all’. being reminded of what’s being done to dairy cows and their babies as we speak can ruin my mood for the rest of the day. on a vulnerable day it can, and has, more than once, reduced me to a blubbering crying mess. just tag it.

(fellow vegans: it is useful to CW food posts as "vegan" because so many people fail to mark animal abuse that I usually avoid clicking "food" toots, unless I know the person to be vegan.)

please also CW selfies or photos with things made of animal bodies, or things taken from animals, like animal leather, wool, horn, honey, beeswax etc. and CW animals in conditions of exploitation, like farm animals.

I’m not triggered by those things. It’s not abuse done to _me_ after all, I hold the speciesist privilege like all of us. I’m not disgusted or squeamish either, that’s not how any of this works. When I look at a photo with an animal product, I’m not looking at a piece of animal tissue and going ‘ew, gooey’. I’m looking at a nightmare machine of entirely unnecessary exploitation and pain, at a powerful ideological system wrapped around it to normalise it. I’m thinking of what was done to a living, feeling, sensitive being (or, in the case of milk, to a family) to produce that thing, and then trying to multiply it in my head times 990 million cows or 23 billion chickens etc. I can't help myself from doing the algebra of integer times pain. I’m thinking of what happens to human workers in the animal industry. I can’t turn it _off_, once I learned to see processes I can’t unsee them. I’m looking at my own impotence to make this absurd situation just stop, stop, at my own guilt to just carry on with life as if this inconceivable maelstrom of 100% avoidable, unbearable suffering didn’t matter.

So it’s a little bit depressing.

The other peeves are just terminological quibbles and not super important or anything, I understand why people say that and I take it in stride, they just reflect common misconceptions.

• Not "vegan diet". It's not a diet. Plant-based is a diet. Veganism is an ethical position; it's the observation that all beings capable of suffering are moral subjects. It’s no more a diet than ‘Kantian consequentialism’ or ‘Vedic nītiśāstra’. Reducing it to diet is already taken for granted the objectification of other animals which is just the point in question.

- Not "dietary restriction" either. If I don’t rob candy from a child I’m not restricting my diet, I’m trying to be a good person. Not eating honey robbed from bees is literally, exactly, exactly, the same.

As it happens, the animal industry is terrible for the environment, and eating plants is a much more efficient use of resources (necessarily, because of trophic loss). If you think this or that form of animal exploitation is better for the environment chances are it’s capitalist propaganda and will turn out to be wrong upon examination. Even if we are thinking purely of saving humanity from the looming catastrophe, stopping animal exploitation is about the best measure we can take.

But this is just a happy coincidence. Even if it was the other way around and killing or enslaving other animals could save millions, it would be still wrong. The self-interest of humans, however aligned to it, is not the reason why it’s wrong. (In this hypothetical scenario, if we _had_ to choose, then I wouldn’t blame people for choosing self-preservation at the expense of other lives. But then the task would be to find out ways to get the necessary resources without all the killing. In our reality, that step is already given, all we needed was to figure out B12 production and that's long been solved.)

I don’t argue vegan stuff and I don’t ask for arguments, but leaving that aside, to bring me ecological (or, even worse, nutritional) arguments is to miss the point.

> Stannis: I know the cost! […] If Joffrey should die... what is the life of one bastard boy against a kingdom?
> Davos: Everything.

(A Song of Ice and Fire)

@vy this is how it looked in the end product, ty 🙏

(these are built into the #trådfri lamps, I wrote a loop to trigger a random effect at random intervals)

those light transitions tho >u<

clip from stream, re: our gemini home

my levels of intimacy with trans girls:

0: will have sex with you
1: will say hi I love your outfit
2: will provide emotional support
5: will invite you home and cook for you
10: will ask emotional support
20: will sing out loud near you
100: "do you want to see my pre-transition photos?"
300: will ask you to clean the dishes
400: will call you "bitch" as a casual vocative* (if you assure me it feels reclaimable to you too)
500: will confess problematic opinions
1000: "when you talk about ownership kink, how does that look like in your mind, in concrete terms, how do you dream of being owned"
10000: will ask for help with housekeeping 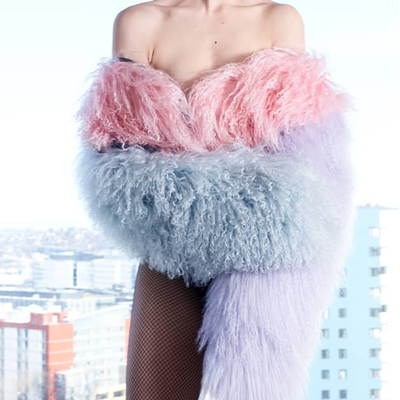 what's the next step for our gemini home? I guess a "what's new" of some sort — atom feed , and in-gemini links too.

notes on how this is done

1. using the blue and magenta hexa colours from the game's logo

2. approximate lag value determined experimentally, so it looks like this:

re: IOT is kinda equally parts absurd and cool

other ideas to do with my gift

- average color of game stream window, output it to bulb.
- output the complementary colour to bulb.
- put another lamp on desk, do analogous colours adjacent to dominant
- or do split complementary
- pick between analogous and split-complementary based on pulse beat of music, or franctiness of input
- for games where this is possible, stream with lighting reacting to internal game state somehow (e.g. day/night cycles, seasons, elemental magic…).

- install something like Simon, train it to listen to "moon prism power, ma~ke UP!" as a command to turn all lights to 5000K maximum brightness for doing makeup
- bonus: hook up the same command to turn makeup mirror LEDs with it (will need either to hack mirror, say force lights to always on and control via its usb power only, or get a new mirror)

in either case I'll make the transitions slower ofc 😌

or I can just turn on the room light and bump down the white balance, then compensate for the chroma loss with software saturation

cybre lights only in #va11_hall_a colours gives a nice hue, but it’s too dark. I can bump up the gain on software, but then it washes out a bit

pretty proud of myselves for the thing yesterday ngl

just catched myself thinking "ugh math is exhausting, maybe i should read kant instead"

statements dreamed up by the utterly foolish

yes I know it’s not as popular as BBSes or Usenet are right now but mark my words, one day there will be more #gemini capsules than even gopher servers!!

> about me being "not neurotic": this is an old psychiatric category, right? given my (so-called) hallucinations and multiple identities I guess in this old scheme I would be the psychotic xD hmm I like being psychotic it’s #hotGirlThings

no seriously like most of us I struggle with depression, anxieties, dysfunction, shutting off for days etc. long ago I’ve taken the conscious decision to highlight the good parts in my online presence and I don’t regret it, I’ve come to the conclusion that positivity is good actually. sometimes I vent abt the bad things on the bitchy alt, locked, because I don’t want to spread it, I want to spread love and happiness 💖

but anybody who dates me has seen me cry, often, has dealt with the house being a pigpen etc. and like I said before I don’t think I would be able to endure all the bad stuff at all, if I didn’t have so many people caring for me.